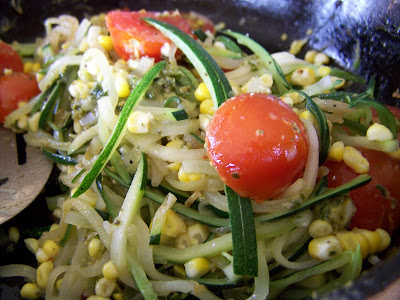 I've made this concoction twice for lunches this week.  I have been keeping a bucket of raw zucchini already sliced into "noodles" in my fridge so I have it on hand ready to go.  I put a couple large handfuls  into a cast iron skillet with some oil and garlic and sauteed it for a bit until the zucchini was just tender.  Then I added some cherry tomatoes sliced in half, some raw corn I cut off the cob and a large spoonful of pesto and let this cook for a minute or two.  I added a squirt of Bragg's and some pepper and that was it.  Really simple and delicious. 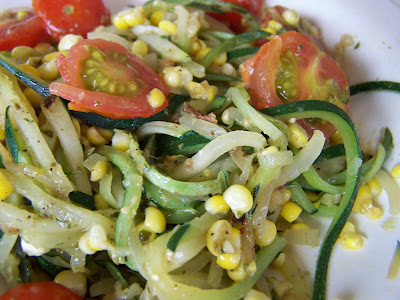 Now if I could only think of something more appealing to call it than hash.
Posted by Heather at 6:59 AM

That just looks so fresh and good!

Heehee! I find naming concoctions with a french flair makes them SOUND more appealing...How about "Melange du courgette"? haha! Or Zucchini Ratatouille. I posted about zucchinis today too...might try your idea of lunch! Wonder if I can fool my picky eater into thinking it's pasta (she won't even eat the veg-coloured pasta so I may have to peel it...)

Goodness, you must be setting zucchini growing records this year. Love the look of those zuke noodles - more fun than just grated.

Looks fantastic. How about..."zucchini vegetable toss." Either way...I love vegetable hashes and so I will definitely be trying this...soon. -Debbie

I will totally have to give this a try. We have zucchini coming out our ears, but most likely anyone who planted it does as well. I have been baking lots of zucchini bread.

Hi...I'm Laura from Italy! Lovely blog!
I will link you on my blog and I'd like to invite you to visite also my blog :D

My First time commenting.
I am a Muslim Female living in South Africa.

I have been avid reader of your blog since you moved from "Four Friends."
I Love the Wonderful Life Style choices you make for Yourself and Family.

How about Zoo Noodles?

Farzana - Hello, so glad you took the time to comment and thank you for your compliment. I appreciate it. It is good to hear from you. I love Zoo Noodles - sounds so fun...and frankly, sometimes it is rather like a zoo around here. ;-)