The other day our homelearning group went to a pumpkin farm and had a fun morning.  The corn maze and the pumpkin slingshot were big hits with my boys.  (I have a feeling we will be making a sling shot like this very soon) 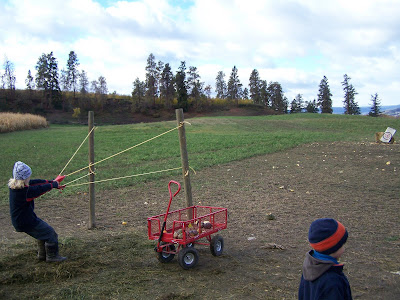 Since this farm had lost most of their pumpkins to an unexpected hard frost we stopped off just down the road and found another farmer cleaning up his field.  We bought two pumpkins from him and he gave the boys three more.  They set to work carving them while I took care of the seeds. 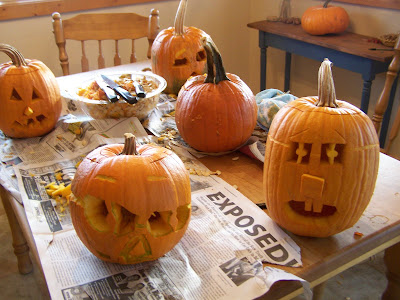 Some I saved to plant next year and the rest I roasted - a spray of olive oil on all and then some with Herbamare and some with Bragg's. 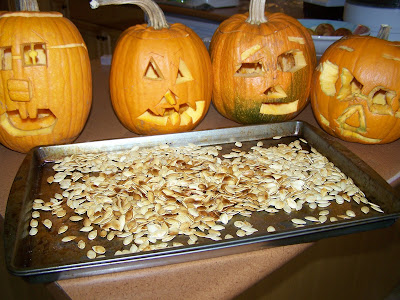 I also had some pumpkin defrosting to make this pumpkin bar recipe a friend had told me about.  I liked the recipe because it called for applesauce - something I happen to have  a  lot of on hand. 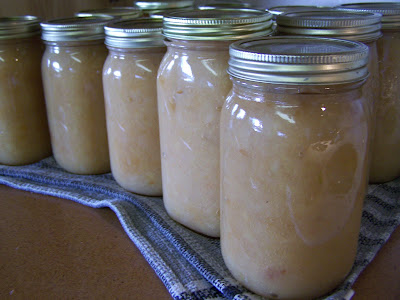 I mostly followed the recipe except I used my own pumpkin puree instead of canned so I used a bit more pumpkin and one less egg.  I also added a titch more applesauce.  I don't have pumpkin pie spice so I just used these spices to make up the called for amount - cloves, fresh ground nutmeg and cinamon. 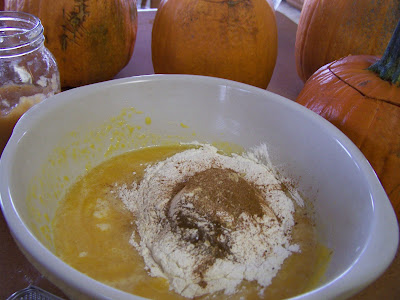 I made the icing with a block of cream cheese, a spoonful of butter, the cinnamon and then a big dollop of honey as a sweetener.  Delicious.  The icing really, really makes the bars. 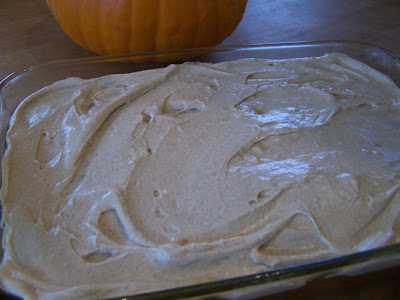 Then we had a delicious tea time while the snow came down and we were cozy  inside. 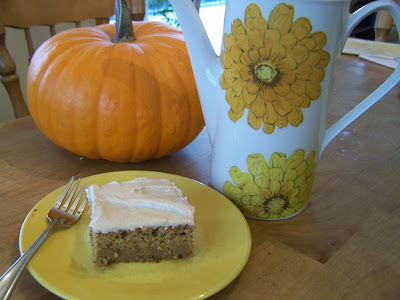 These bars are incredibly moist.  I had to cook them for about 10-15 minutes longer than the recipe called for and they came out just right.  Definitely a keeper recipe. 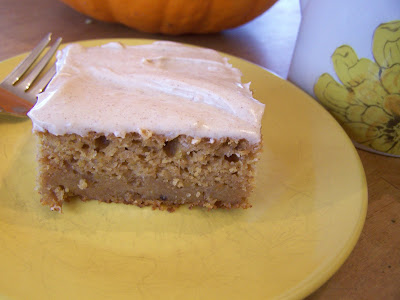 Ok. This just looks too yummy. I can't stand it. I'm just going to have to go make some for myself.

I bought a sugar pumpkin at the store the other day to make some more of your curried pumpkin soup, (so yummy) but now I will need to use some of it to make these bars! Thanks so much for this, Heather!

Leigh -Yes, it really, really is worth trying. I hope you'll let me know how you like it...just don't skimp on the icing. ;-)

Hi Frances - Glad to hear you liked the soup, it's always nice to find a quick and easy but also yummy recipe. Hope your family likes the bars too. :-) Sugar pumpkin sounds delicious. Will you save seeds from it for your garden? (one track mind I have, heh?) ;-)

Yummmm! I made the pumpkin bars again and cooked them a bit longer (i think almost 50 minutes) and they were so very good. Actually I made 2 batches and cooked them in 3 pans. That way P could have his own cake with his own non-dairy icing! delish!

YUM! I need to try these. xo

As a kid I would have for hours using that pumpkin slingshot. I love to see things smash and break. I like how you included cinnamon and honey in the icing. Very healthy and very tasty. that was a good call on your part.