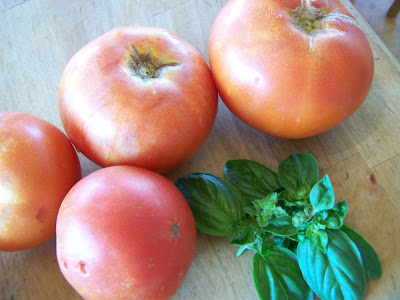 Last week I went to the farm market to buy - yes, I had to buy (much hand wringing and wishing for my old garden) - some very ripe, delicious tomatoes. After spending the day with a friend and having the tomatoes sit in the car they were edging over to the over-ripe side by the time I got home. I used the ripest ones in the zucchini spaghetti and then decided to try making a tomato pie with some of the others. I had a pie shell in the freezer to use so I sprinkled some bread crumbs in the bottom and then sliced two good sized tomatoes into it. I added some grated zucchini (notice how I stick that in everywhere) and then sliced two more tomatoes on top of that and then made a cheese topping to cover it. 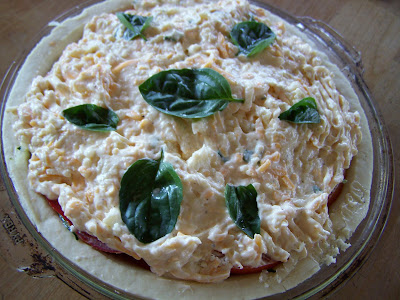 The cheese topping is about 2/3 cup of mayo mixed with fresh crushed garlic, 1/2 cup or so of grated cheese (I used cheddar this time), some fresh torn basil leaves, salt, pepper and some grated Romano (Parmesan would do nicely as well). I spread this over the tomato pie, topped with some basil leaves and then baked it for about 30 minutes at 350. We ended up taking it to the beach to share cold with friends (boy, the boys had a hard time seeing it in the fridge and not getting to at least test it) 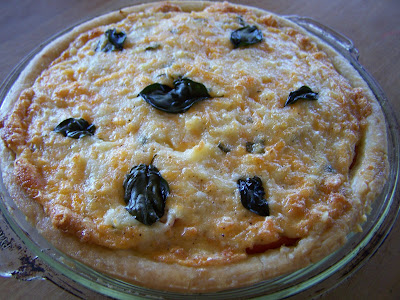 It was incredibly delicious. One thing I would do differently next time would be to not use a store bought pie shell. I had wanted to use the crust from a recipe I make out of the Simply in Season cookbook but I didn't have the book on hand. I've since picked it up from the library (its other home) and will be making this pie again with the whole wheat crust from the Plum Tomato Goad Cheese Pie recipe.
Posted by Heather at 7:40 AM

oh.my.goodness. I might have to stop reading your blog until our dairy-strike is over!! YUM!!!