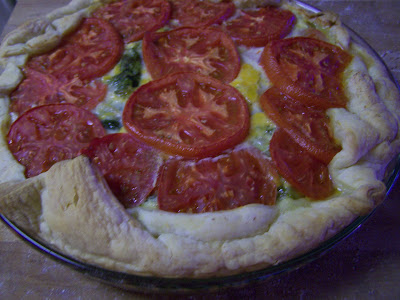 I've been putting those sweet potatoes to good use.  I happened across a recipe for a Rustic Vegetable Torte in a library magazine (either Harrowsmith or Mother Earth News, I can't find it anymore and can't remember which one but I  know it was a recent issue) and thought I would give it a try.  The recipe looked a little longish (for my liking) but it actually went together really quickly.  First, roast thin slices of sweet potato and then  put them on a rolled out sheet of puff pastry. 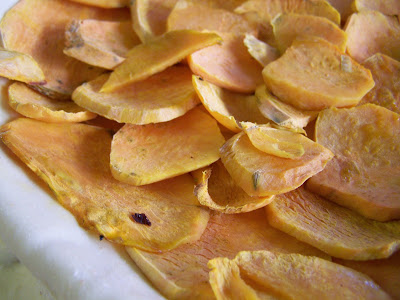 Then I sauteed some spinach and green onions from the garden and put those on top. 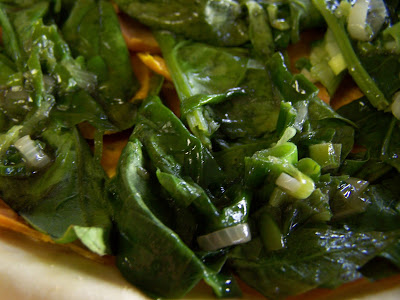 I added some cheese, some spices and some tomatoes from the garden and...I think that was it.  Baked it. 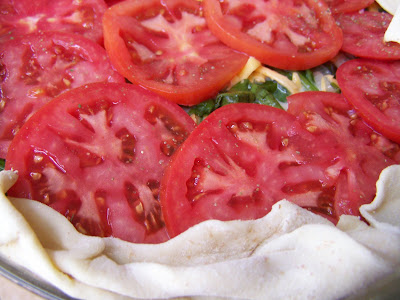 And...it was as delicious as I had hoped it would be. 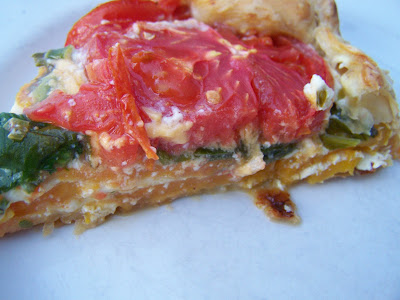 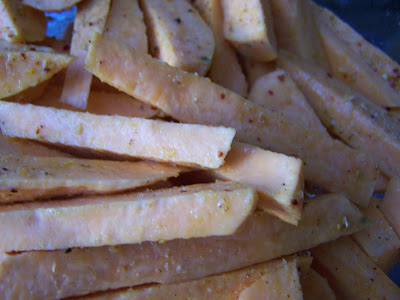 I just cut up the sweet potatoes and drizzled them in olive oil and spices then mixed them up and put them (single layer) on a baking sheet.  Baked them at 450 for about 20-25 minutes and snapped a photo quickly before they were gobbled up. 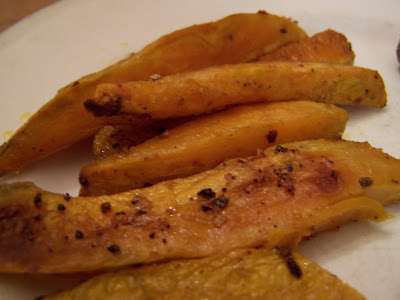 I have to admit that at this point in the season we're all getting a little tired of the piles of tomatoes and zucchini on every surface of the house.  Last night I went to flip through some cookbooks in desperate search of a new way to prepare zucchini and I said to E that I was looking for a new recipe.  He told me that he knew a new way to prepare zucchini.
E - "Take one zucchini..."
Me - "Yes, uh-huh."
E - "And then you throw it off the bank."
Me - No reply for my wise acre son!
And so we had zucchini fritters along with our cherry tomato pasta.  And...there wasn't a speck leftover.
Posted by Heather at 6:48 AM

My goodness does that look good. I think I may need to make that tonight.

I'm drooling onto my keyboard!

Oh, that "throw it off the bank" really made me smile. It is nice to see humour with a softness. :-) I love E's sense of humour (as I'm sure you do too!). What great things you're making. When we made the sweet potato fries they went fast too. We also roasted ours, instead of the dunk-in-oil method. We had a teeny bit of a problem getting them actually done right through, and as I look at how you cut yours, ours were probably too thick. At the time we'd been trying to emulate them based on a restaurant on the Sunshine Coast where they served them with a curried yogurt dip!! Theirs were great thick slabs, and I've no idea how they actually roasted them, or for how long etc. Sooo, so good! So, next time we attempt these, (once we replace our oven) I'll try them thinner!

I really need to make some kind of rustic torte. You keep posting about different ones and it always looks so delicious!

yum yum yummy...that's what's for dinner tonite! THANK YOU MUCH! ;)

my mouth is watering...I'll be trying out this recipe it looks delicious! Thank You!

You simply must post your recipe for the crust you use here. It looks so good and mine turned out crumbly and dry. Your picture makes it look so good.

Hi Jane
That crust is just a sheet of store bought puff pastry that I had in the freezer. It was good. ;-) Usually I use this recipe for tomato pies and I think it would also work well for this recipe if you prefer something from scratch.