What I Shouldn't Have Done on My Summer Vacation

So now I have to admit to a very stupid thing I did on our vacation.  I saw several people pulled over alongside the roadway and so, curious and sometimes impulsive creature that I am, I wanted to find out what they were looking at.  I walked up along the roadside of a pulled over motorhome, popped out in front of it to see what was there and there I saw it indeed.  A bear. Not very far from me...standing there...on the side of the road...with no car around me as protection.   I should have known, I suppose, that it was a bear that had caused people to pull over but I didn't stop long enough to even think about it. 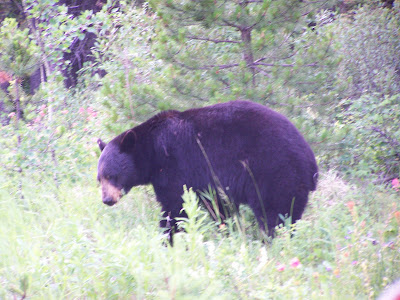 And, even more stupidly, I took a couple pictures before common sense kicked back in, I realized what I was doing and high-tailed it down the road as quickly as I could.  I'm sure that look on the bear's face is disgust with another silly tourist. 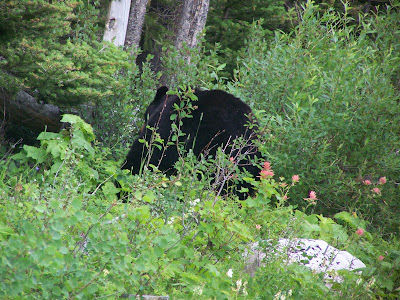 Oooops.
Glad he was dis-inclined to make your acquaintance.

Woah that is scary! I probably would have taken a few pics too before realizing what I was doing too though. I've done something similar too before, but with a whole herd of mountain goats. Good thing that bear was more interested in the woods than in you.

I know we need to be cautious of bears, as there are some rogue ones in the mix, but I suspect this guy was really more about minding his own business. As long as he wasn't surprised, he probably didn't mind that you were there.

You should ask Frances about her "Bear Wash" idea, sometime.

Thanks for your zucchini recipes. The zukes are just starting to pour down in our garden and I am looking for ways to mix it up. Love the zucchini spaghetti idea.

You are very brave! Don't know that I could have passed that up either!

So glad you're safe! We saw a bear in NC near my parent's home this summer too...

I have fond memories of travelling out to BC with my family...anytime we saw cars pulled over we did too, because we knew we'd see SOMETHING amazing...usually a bear! Magnificent creature!

all's well that ends well!!! fun that you got a good look at this beauty!

Yes there is a certain thrill about being so close to something so wild, even when they are habitualized to people (roadside bears are often habituated to food offered or thrown out windows as garbage. I completely relate to that momentary pull to watch it!

Years ago in Oregon, I was camping with friends and I stepped between a group of female elk and a group of male elk taking pictures, and was caught in the middle. The males started coming closer to protect the females! I was so glad to gat away from them as they advanced slowly towards me! Silly girl I was!