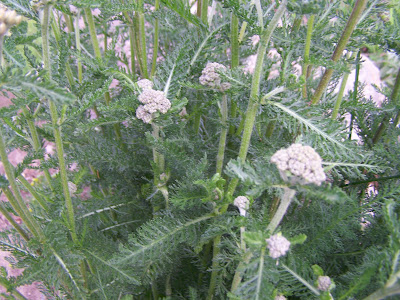 I've been wanting to try making some bug spray for awhile now but I always forget until we are actually out in the woods being bitten by mosquitos.  This time I remembered a few hours earlier than usual so Wednesday morning, before heading out camping, saw me out picking some yarrow. 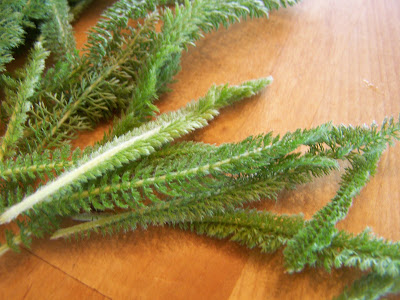 I think a yarrow tincture would be best to use (it would last longer and not "go off" as I think the one made from tea is likely to do) but for this trip I decided to make up a recipe using yarrow tea.  I picked a large handful of yarrow leaves and simmered them in water for about 5 minutes and then left them to steep.  I strained off the leaves and then poured the cooled "tea" into a jar with some witch hazel (maybe 2 parts tea to 1 part witch hazel) then added a few drops of lavender essential oil and a few drops of lemon grass essential oil.  I can't say for sure if the spray worked but I came home from camping in the rainy woods with no mosquito bites so surely that is a good sign.  Also, after several days with no shower a little something pretty smelling to spray on can't be a bad thing. 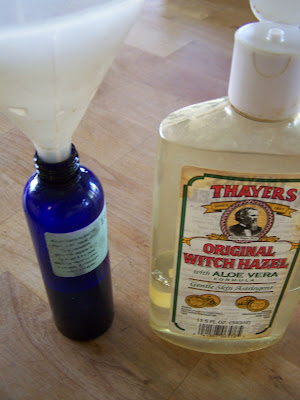 And...while I was steeping the yarrow for the tea I also finally took the time (ooh, about 2 minutes) to make a yarrow tincture so that I would have some for the next time I want to make bug spray. 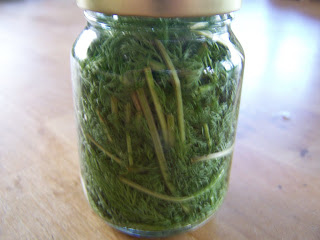 Thanks for the idea! I'll have to make some.

I'm laughing because my husband weed-whacked all my yarrow!!! That is so not cool! I would love to try this out! Maybe I will go hunt the neighbors... Thanks for sharing!!

Yarrow, eh? I never knew it was a good mosquito repellent. I'm going to try that.

Panoted: Pan noted that the space bar on his computer was getting a little sticky.

Oh how I would love something natural that worked. I am so bit up I look like I have chicken pox. I am allergic to the bites so they swell up nice and big and turn bright red. Would this also work with lemon balm because I do not think I have any yarrow around here.

What a good idea - I didn't know that yarrow was a good repellent...

Yes, I would like to try it too. I have plenty of yarrow. Thanks for the recipe.

This is so great. I get about 10 bites in the few minutes it takes me to walk to the back of our yard to check our raspberry bush. We are surrounded by trees and therefore are infested (?) with mosquitos.
I don't have yarrow growing (yet) but will check out the tincture. -Debbie

Nice! I've never worked with yarrow - it's intriguing. I usually mix some lemon eucalyptus essential oil with a carrier oil like grapeseed or sweet almond, and it works really well, too. I sent my husband off to ultimate frisbee with some a few minutes ago. :) Thanks for the recipe!

Hi Jane, I would definitely try making some with lemon balm, it does have repelling (to mosquitos) properties. I used the yarrow because it grows wild here but would be interested to hear if you find lemon balm works well. So much healthier to put on your skin than any typical commercial product.

Ah, yarrow. I never knew it worked as a repellent! By the way, if you smear dried lavender or catmint dust on your arms, it works- for a minute, at least. You know, if you're bite-prone like I am-- as soon as I walk out the door to get the newspaper, I get attacked!!!!!!!!!