I've always loved compost and this year I am really missing my old three bin system.  Since we are here temporarily I won't build another yet and have been making do with two black plastic compost bins.  I can see why so many people are discouraged by these systems - I ended up with two bins full of rotting, smelly vegetable muck.  I know this is my own fault because I was so used to a slap-dash, little work method of composting in my three bins that I didn't take the time to use these bins properly and layer brown with green.  But...I am a slap-dasher and don't want to have to have compost be a lot of work, I like the throw-it-in-and-let-it-rot method. 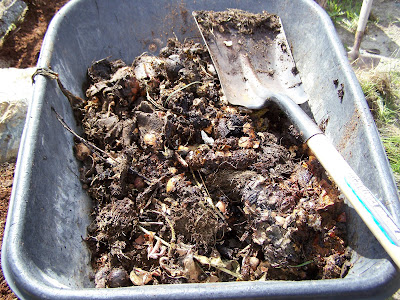 Anyway, I still wanted to use the rotting veggie muck that my black bins produced so I dug some trenches in my beds and added it in, I've done this before with veggie matter and it always works well.  It is called trench composting and it is great for an Impatient Gardener such as myself - I feel as though the organic matter gets into my soil right away thanks to a little help from my worm friends.  Recently I've been looking through this wonderful book and decided to try out one of their ideas.

A Honey Hole. Perfect for using up the smelly veg muck and improving the poor soil here.  I dug some holes  in a new spot where I planned on planting tomatoes, zuchinni and pumpkins then I filled the holes with the muck, covered with soil and planted.  Honey holes...love it. 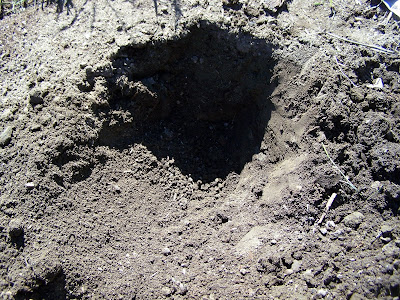 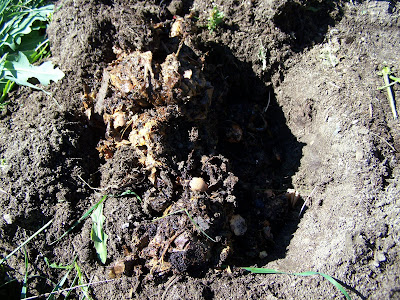 This book also waxes eloquently about Comforter Compost and Grow Heaps (which I am a big fan of but I've never had a name for them before)- basically a "heap" of organic matter that will decompose into gorgeous soil while your plants grow in it.  Last year I made some hills of decent soil, organic matter and manure on top of the poor soil here to plant some pumpkins.  Several months ago I tossed an old pumpkin out onto one of the hills and a last week I noticed this. 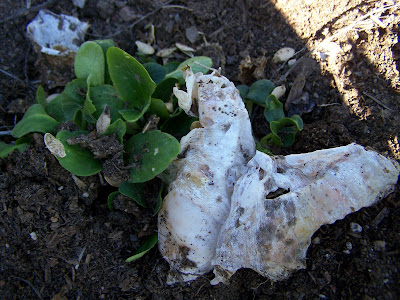 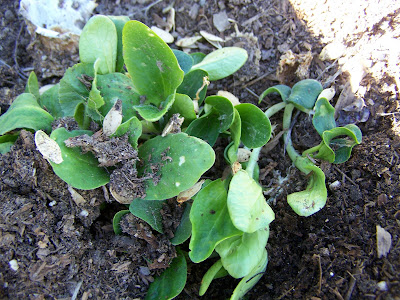 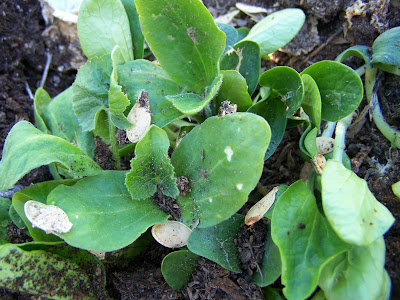 New pumpkins growing from the rotting old pumpkin.
So many more gardening things to talk about - planting tomato prunings, more nettle tea tales, mulching mania, weeding in the rain and my crazy tomato addiction.  Hoping you all have been enjoying your time in the garden too, would love to hear what's ready in your garden.
Posted by Heather at 10:45 AM

Love it! I'm an impatient and lazy composter, myself, and may have set a city friend of mine astray when I recommended my lazy method for her urban backyard trashcan composter. Oops...she got muck.

I love your approach Heather. I love compost but have never been good about balancing out the green and brown matter. We even bought a book on composting to learn more about the science. Our friend bought us a big black composter (because he broke our previous one while he was cutting down a tree in our yard) that can be turned. Everything breaks down quite quickly - but there are no worms involved. :(

We also have a huge pile at the back of our yard where we throw tons of stuff but we need to turn it more than we do. As it stands, this heap has everything I've pulled from my garden growing out of it. Weeds, flowers, vegetables. :)

Isn't composting amazing? (And I love that book!) A friend of mine had a bunch of potatoes come up in her compost heap this year, similar to your pumpkins. I just love how something you throw away can then grow into something useful. Talk about perfect recycling!

Does that book give a good description of how to do the 3 bin composting? Or would you recommend something else? We need to get it set up now, in preparation for next spring. It's reassuring to know that there are fixes for less-than-perfect compost results, just in case. Thanks! ...Now back to hacking down my forest of thistles. Bleh. :oP

This looks like a book worth seeking out. We have a two-bin-plus-black-composter set-up...and we need to work with it. The black composter was to, yes-put in quickly accumulating scraps from the kitchen and the plan being to layer it with soil each time ;-) A plan not currently followed by me or Scott ;-) I haven't even LOOKED in it for awhile ;-) Who knows what might be lurking.

So, with the placing of compost into trenches and holes, it just makes sense! Less work composting-more slap dashing-leaves more time to do all else. Brilliant concepts, and I'm going to look for it the book, as I've nominated myself "compost caregiver" this year :-) That way there's a slight shred of hope we make some nice stuff

Every year, I get squash seeds sprouting from the compost I put around the garden I let them grow. Last year, I got about 10 acorn squashes. One year I got a giant pumpkin! Gardening is so much fun!

Hi Lise, sounds like her result was the same as my mucky result - I hope she was able to dig it into her soil anyway.

Debbie, it sounds like you would enjoy that compost book I mentioned as well then, it definitely caters to those who don't like to follow the "rules" when composting. ;-) Maybe we should call it Bend the Rules Composting??


Greenie, that is my favourite kind of recycling too! My mom often grows potatoes in her compost/garden refuse heap (initially by accident) because she thinks she gets way nicer potatoes - bigger, more and also cleaner - than those grown in her regular garden.

Frances, I think this book is really, really worth reading but if you are wanting a book with a 3 bin compost bin pattern we used the Rodale Book of Composting. If you scroll down on this
link

you will find directions for making the bin (just in case you are sooo keen that you want to get started on it this weekend). ;-) My Dad and I made my old one (sans lids) and we made it out of all used bits and pieces so you don't need to follow the directions on this link exactly, they're just to give you an idea.

Erin, it IS worth seeking out - even asking your library to purchase if they don't already have it. So much interesting information. It's one of those books (like Gaia's Garden) where you just have to keep putting it down and going out in the garden to TRY the things they talk about because it is so inspiring. My favourite kind of book!

this comment is totally unrelated to this post. I really like your blog (homeschooling, nature living, recipes, etc.) I would like your input on apple/water/cinnamon stick quantities. I'm busy making apple-sauce. My email is: