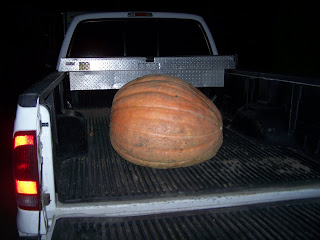 Someone asked how I cook and prepare the pumpkins for use. First (and I don't know if this is true or not but...) I only use pumpkins that we haven't had candles in. I've heard that it is dangerous to eat pumpkins that have had candles burning in them so we used lights in our instead. I cut it in slabs and then bake them at 350 for about 40 minutes (much as you would bake squash). This giant pumpkin is so thick that it took a little longer to bake so most of yesterday afternoon was busy with this job. I could only fit half the pumpkin into the oven at one time so had to bake in two batches. I ended up giving one slab away to a neighbour too. 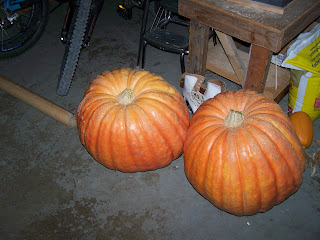 When it is baked (you can tell because you should be able to poke it with a fork and it will be very tender) I let it cool a bit and then scoop the flesh out. Then I run it through a food processor for a minute because we like it to be nice and smooth - especially for use in pies. After that's done I put it in freezer bags (in 2, 3 and 4 cup portions) and freeze them flat on a cookie sheet so that they will stack in the freezer nicely. This photo shows most of the cooked pumpkin from just that one giant pumpkin. 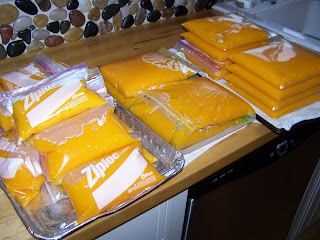 Two more to go...but one will be frozen raw and shredded in portions for our dog to eat this winter.

Forgot to show you how these were carved. Power Tools!!! 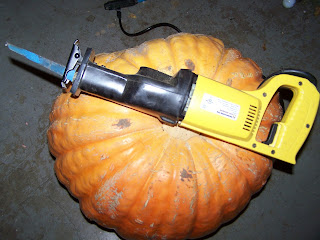 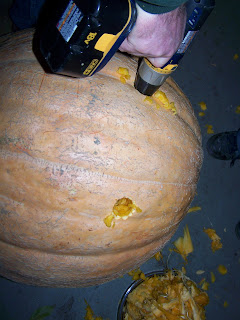 That looks huge! and Yummy! I freeze a lot of squash too - Yum!

oh Thank you so much although we did burn a candle in ours hmm maybe next year we can prepare it for use beyond the compost bin. Thank you so much for sharing and offering up your simple way of life. It is truly appreciated.

that is one big pumpkin! we've been freezing our pumpkin puree too...that is a LOT from ONE pumpkin! :)