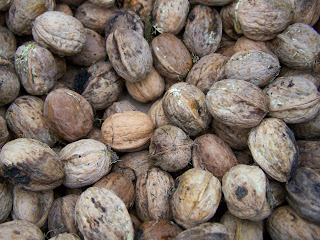 It really is starting to feel like Autumn around here. Yesterday I started collecting our walnuts and that always makes me feel as though Autumn has set in. We spent some time tidying the house, cleaning windows, taking off window screens and pruning some trees. 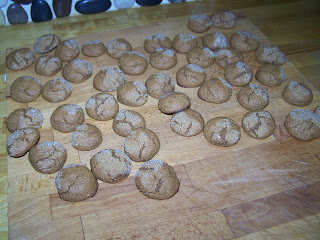 We are inside a bit more at this time of year and it is cool enough that we enjoy baking again. Baking more again made me think I should get going on finishing the kitchen. (Rather like If You Give a Pig a Pancake) I finally, finally got to work on finishing the last bits of our kitchen reno...the one that we did most of two years ago. We are DIYers and we laugh at ourselves because we often complete a job almost fully but then leave the last tiny bit of it undone. It is like we get it to the point of good function and then leave the little details 'til we have more time...but then there is always something else to do. I plan on finishing the grouting around the rocks and some more patching, sanding and painting today and hopefully only having one more coat of paint (on the patched bits) to do tomorrow morning. I think I listened to the Mamma Mia soundtrack (from the play not the movie) at least three times yesterday while I did this. While making dinner I was humming more ABBA when my poor long-suffering husband asked me if that was ABBA that I was humming. I think his ABBA limit had been reached...to say the least. ;-)We have also been settling into more indoor activities and E decided once again that he would like to knit. I found an excellent book on simple knitted toys at the library. He decided that he would knit a horse to start with. We knit together with him on my lap and after only a few knitted rows on one leg of the horse he decided that he would knit a "whole farm" of animals, will my lap take it? We'll see. 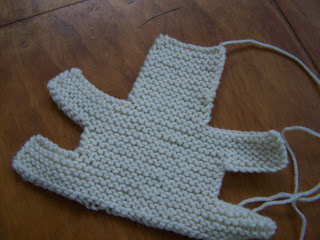 I knit a lamb while we were all sitting out on a blanket soaking up the sunshine. They're fun little things to knit and I can see E enjoying this process more than he would a dishcloth or scarf because at the end of his work he will have something he can play with. 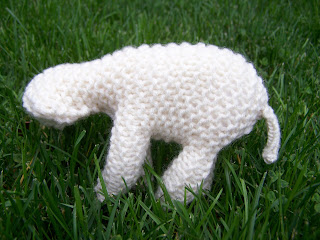 Labels: Good Food, Just Do It., Make It Yourself

Do share the title of the book, please! Those knit animals are so great :) I'd love a whole farm full myself! Thanks for the cozy update :)

Your sheep is lovely! Do you know the little Waldorf verse for learning to knit? V. is just learning and finds it helpful and I find I repeat it myself sometimes! "In through the front door...around the back...peek through the window...and off jumps jack"

The book is called A First Book of Knitting for Children. The authors are Bonnie Gosse and Jill Allerton. It looks like they have a second book too that I would like to have a look at. E is still working away at his horse, I have started on an elephant and W decided that he would start a pig. I think these simple projects will keep our motivation high. ;-) I tend to start a big project and then my enthusiasm dwindles and it sits in a pile for a year or so.

Hi Joanne
I was going to ask if it was you who had asked our library to buy this book. I remember you telling me about a Waldorf type one with great little animals.

The poem that I taught Ev goes like this:
Under the fence, catch the sheep, back we come, off we leap.
He likes that it is easy to remember. Maybe you should start using that one since it sounds like you might be adding some sheep to your family soon. ;-0