It has always been important to me that my boys have certain life skills, one of those skills is that they learn how to cook. After all, to my way of thinking, anyone who likes to eat should know how to feed themselves. W has been responsible for one dinner a week for quite some time (my kids usually prepare their own, or part of their own, breakfast and lunch) but just recently E (at 8 years old) has decided that he would like to be in charge of one dinner a week too. A few weeks back we were treated to "slop in a pan" - quite a feast, I tell you. I admit, it may not sound entirely appetizing but I am a big fan of anything that I don't have to make myself and so we ate E's "slop in a pan" with pleasure. 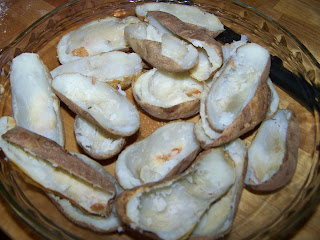 The other day he decided he would make gnocchi (since I wouldn't buy the pre-made kind for him as I know how easy it is to make). We found a new recipe online that used baked potatoes instead of boiled (how I usually make it) and away he went. Potatoes were baked in the toaster oven while he played outside then he came in and we scooped out the baked flesh. A bonus about baking them instead of boiling is that we are left with all these potatoes skins to make another meal with. 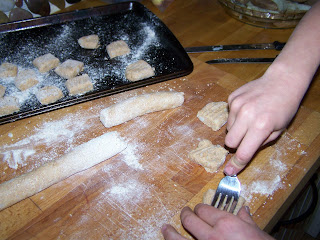 He added some beaten egg, salt and flour and that was it. (although next time he wants to add garlic and more spices). I rolled out the dough into logs, he cut into pieces and pressed it with a fork. 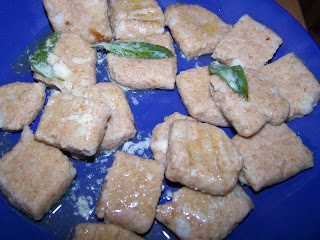 We decided to have them with sage butter so he ran out to pick some sage. He pressed sage leaves between two big slices of butter and then melted it all in a pot. The gnocchi went into a big pot of boiling salted water until they floated to the top. We scooped them out, drowned them in the sage butter and served them with pepper and Romano cheese. We had it with a side of tomato salad - what else? we've got a whole lot of tomatoes to eat up. 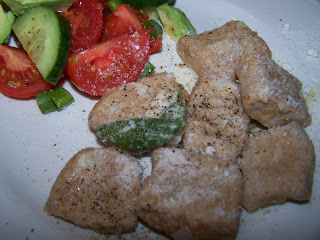 This was seriously plate-licking good. Sage butter is a new favourite. All in all I think he was very pleased with his efforts...although I don't hold out any hope that "slop in a pan" won't be gracing our dinner table again soon. I did try to tell him that Jamie Oliver likely wouldn't name any of his dishes "slop in a pan" but I don't think he is overly concerned. ;-)
Posted by Heather at 8:48 AM

I think your son could give Jamie Oliver a run for his money. How about compiling a book of recipes with fun names, I think slop in a pan sounds great. I wish someone would cook it for me! x

That gnocchi sounds great! Where did you find the recipe? And, may I ask, what did you do with the leftover skins?

We just google Jamie Oliver potato gnocchi and a blog came up with the recipe. Today E wants to make pumpkin gnocchi with sage butter. We are going to give this recipe a try.
http://www.cookography.com/2007/pumpkin-gnocchi-with-sage-butter-2

With the potato skins we just baked them for a bit to crisp them up a bit and then added some toppings. We used fresh tomatoes (because we still have lots from the garden), garlic butter, pepper, salt, and topped it all with romano cheese and baked a bit longer 'til golden.