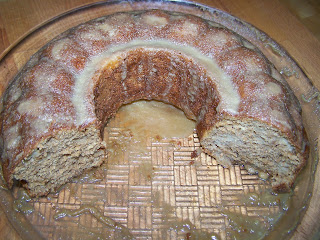 I used to have a really fantastic recipe for an easy pear cake but I lost the recipe when we did our kitchen reno a while back. I wanted to make it for a movie night last night so I found a similar recipe online here. It isn't quite the same but the taste testers all said it was good. I used a little less sugar than the recipe called for and I only put the tiniest sprinkle of cinnamon in because I am pretty sure my original recipe didn't have cinnamon (although if I had made this with apples I would have used the cinnamon). I also used my frozen pear sauce rather than fresh pears so I ended up using a little less milk as well. (I couldn't make it too easy on you, Rebecca) ;-)
Posted by Heather at 9:58 AM

Yum - looks good! I never follow recipes ... always do something to change it. Can't help it! ;)

I always change recipes too and my friends tease me about it. When I give them a recipe they ask if it is the "Heatherized version". ;-)

Just posted a link to your blog about the painted canvas handprint. Hope that is OK. What a fun project.

Looks lovely, how about a sprinkling of ginger next time? x