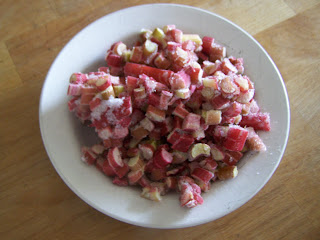 I picked up the February issue of Harrowsmith Country Life from the library on Friday and decided to try out the apple rhubarb muffin recipe they had published. My rhubarb is growing quickly in the garden now and so I wanted to make sure all of last year's rhubarb was used up out of the freezer. 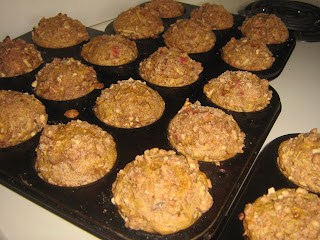 I intentionally doubled all the other ingredients but added a little less sugar than the single recipe called for. I have this thing about muffins being muffins, not cupcakes and so I don't like them to be super sweet. I tried one as soon as they were done and thought that the boys might not like them because they were definitely not very sweet, so I was pleasantly surprised when W declared them the best muffins ever and E agreed that he really liked them too. I think the secret to success was that instead of using sugar and butter in the crumble topping I used a bit of maple syrup and coconut oil. 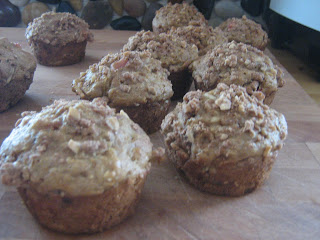 **I also used grapeseed oil instead of melted butter in the batter, oats instead of wheat germ, and I grated the apples instead of using chunks (it made for really moist muffins).
Posted by Heather at 7:50 AM

Labels: I Dig Good Food (Gardening), Make It Yourself

These look so yummy! I have to agree with you on not liking muffins that are super sweet. What's the brand of coconut oil you're using?

Katherine I used Wildnerness Family Naturals - it is organic, comes in a glass jar and was a reasonable price. I can eat it plain and it doesn't have a real "coconutty" taste.

Yum!! Great use of rhubarb - they look delicious!

where do you get the actual recipe...i am trying to find it on this page and i must be blind but i can't find it!!!

The recipe is in the February issue of Harrowsmith Country Life, I didn't copy it out into the post. :-) I got the magazine from our library.