We didn't just have zucchini for dinner each day this week we also had it for lunch and if I can figure out a way to serve it up for breakfast...

We had regular zucchini soup and we also had zucchini corn chowder.  I just sauteed some onion then added some grated zucchini and cooked for minute or two.  Then I added some diced, leftover cooked new potatoes, several cups of broth and some raw corn cut off the cob right into the pot.  I simmered it until the potatoes were warmed through then added some Bragg's and a bit of asiago.  Simple and good. 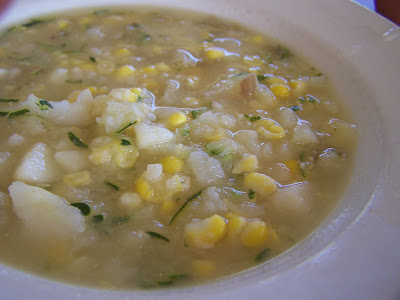 Then, when we were at the garden picking loads more zucchinis and I was trying to think of what we should have for dinner the boys decided they were NOT having any zucchini for dinner...they were going to make pizza.  So they made theirs and I made mine... 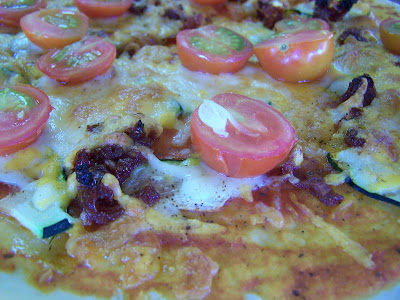 with zucchini.
But they also ended up eating zucchini that night...and quite happily. Zucchini brownies from Simply in Season.  E was at the library and checked out this cookbook for me because he knows it is a favourite.  Now I'm armed with loads more zucchini recipes.
Posted by Heather at 6:00 AM

Adding zucchini to the corn chowder was brilliant - I can't wait to try the brownies!

Are you trying to set some zucchini eating record????LOL
You are doing wonders with this humble veg. I miss having your yummy chocolate zucchini cake. Sure you can't make some for my birthday? ;o)

zuccini for breakfast...how about zuccini bread with homemade jam, or scrambled eggs with zuccini, mushrooms & garlic? (and zuccini bread) - so much zuccini so little time...

looks like you've found some great ways to use your zucchini! My friend and I were just talking yesterday about having a zuchhini party - everyone brings a dish.

We are totally zucchini for breakfast, lunch and dinner. Roasted zukes and corn tossed with fresh tomatoes a top pizza was a winner for sure.
Good luck on your zuke endeavors!

The zucchini overfloweth here too and it's always great to see more recipes/ideas. Can't wait to try those brownies! :)

zucchini pancakes are great!
and mini muffins too:)