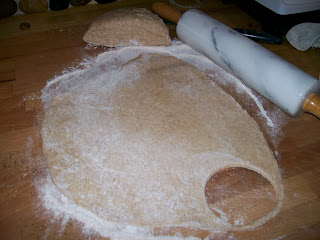 I grew up eating home-made perogies. My brother and I used to have contests to see who could eat the most. 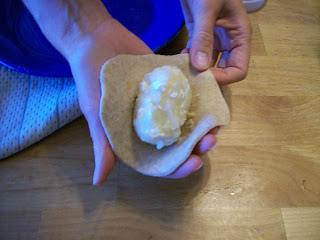 When my oldest was little, I used to make them quite often, but now they seem to have become a "treat", something we make only occasionally. Seems silly, really, because we all love them, and they are actually quite simple to make. 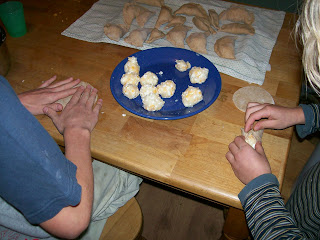 Especially when you have such willing helpers on hand. My boys are motivated by good food! 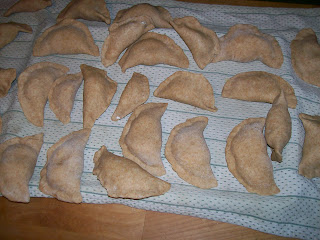 And, were it possible to make "extra", then they could easily be tucked in the freezer so that the effort that was put in would make for two dinners. (looks like we would have to triple the recipe to get any extra around here) 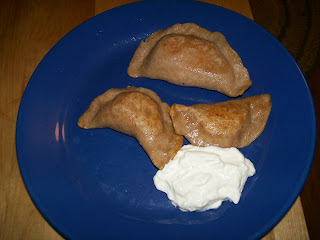 Mmmmm Andrea, Karen and I did that last week with four different fillings and they are soooooo good. Melt-in-your-mouth good. It was my first time making them (I mostly watched, to be honest) but it looked so easy I will definitely be making my own from now on!
What did you use for filling?

These ones have potato, onion, cottage cheese and a bit of cheddar as a filling. I usually like lots of garlic in there too.

Do you have a recipe for this? My family loves frozen store-bought perogies (??), so I am thinking that these must be to die for. From what I've seen I'm going to start coming to eat at your house for now on....
Rebecca ;)

Rebecca, the recipe I use for the dough is from Canadian Living's Country Cooking cookbook, I would think that the library would have it. The filling is just whatever we feel like putting in, really. If you can't find the book at the library, perhaps we will be able to tempt you to a knitting night, with the promise of the recipe??? :-)