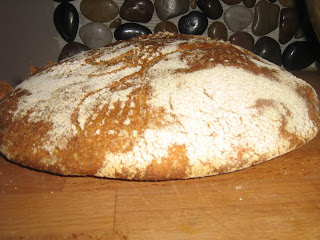 Another goal for this year is to make even more of our food from scratch. One thing I have been looking for is an easy everyday bread recipe. On Saturday we stocked up on library books and I brought home Dec/Jan Mother Earth News magazine. In it I saw an article titled Easy, No Knead Crusty Bread, that article spoke to me, I tell you. That was exactly the kind of bread that I wanted to make on a regular basis. I especially liked the easy, no knead part. So I tried it. Last night around 10 pm S came into the kitchen and asked, "You're making bread?" in a dis-believing voice. Ah, but he did not know that I was making Easy, No Knead (not to mention crusty) bread, did he? Anyway, as I was setting off the smoke detector during baking this afternoon I have to say that I wasn't that impressed. I lifted the lid of the dutch oven that I was baking it in (which was supposed to make it chewy and crusty) and, considering that it was afternoon and this bread had been on the go since 10pm the night before, it looked pretty flat and uninspiring. But now I've had some nibbles of it and I think it is very much my kind of bread. It is chewy on the inside and crusty on the outside. And...it's no knead. What more could I ask for? 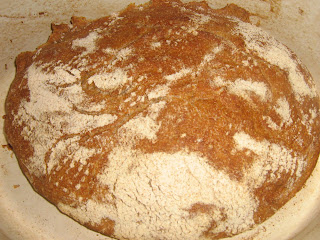 So I won't say that I have accomplished this goal and found the definitive answer to my search for our daily bread, but it's a pretty good one...for now.
Posted by Heather at 3:49 PM

he he he
I tried that recipe too. I had the same response. I kind of LIKE kneading my bread though, I think. I'm still searching for my daily bread recipe, I think. This one was good, but I'm looking for more of a European type bread. Or maybe I have no clue what I'm looking for. Very likely...

Yay..love the new blog...beautiful title too! WE have been experimenting with this recipe a bit too...added some ground flax seed the other day...yummy! It just looks so beautiful when it comes out (we made some for the neighbours and they were pretty wowed!)
Joanne

Thanks you two. And good idea on the flax, Joanne. I will try that next time. I might try a smaller pot to cook it in too, mine was a bit flat-ish.