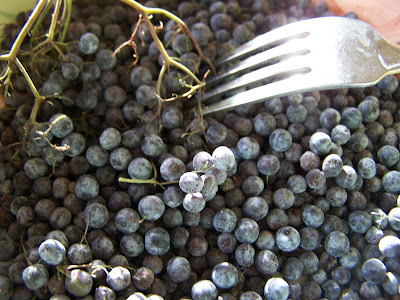 The other day I finally got around to making some Elderberry Elixer.  I first heard of this on  Flow of Love's blog  here and really wanted to try some after making the easy Elderberry Electuary she also posted about.  I checked out the details from the Kiva Rose link and then set to it.   I had put some Elderberries in the freezer in September with the plan to make something with them once I had some time.  I pulled the berries off the stem with a fork and them filled two jars almost to the top with them. 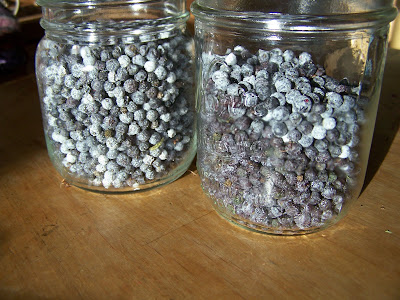 I added a few of my dried rosehips to both jars and a bit of cut up ginger to one jar. 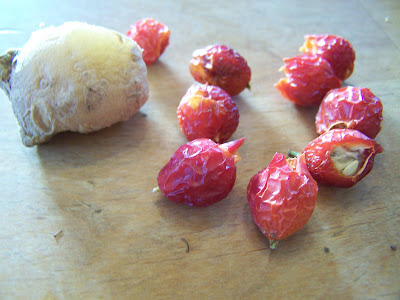 Filled them with alcohol (both were fruit based alcohol and one of them was a gorgeous cherry coloured alcohol).  Topped them off with a rather large dollop of local honey. 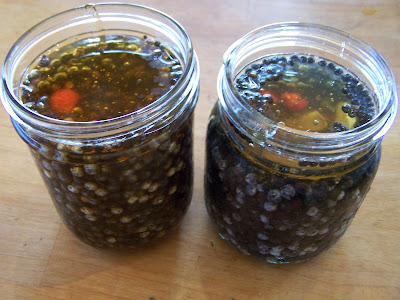 They were stirred,  not shaken. ;-)  Actually I would have shaken them but they were quite full so I settled for stirring. Maybe after a taste test or two there will be room to shake. ;-) 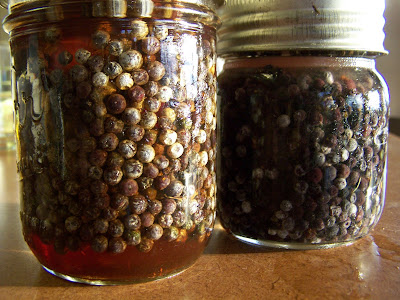 And then I watched them as even the one with clear alcohol turned the prettiest ever shade of burgundy I've ever seen.  This picture doesn't capture it well but trust me, it's gorgeous.  And the smell is utterly divine.  It reminds me of a fruit compote my mom  used to make (which at the time I thought was nothing more than a good way to ruin perfectly good ice cream but am sure I would appreciate much more as an adult). 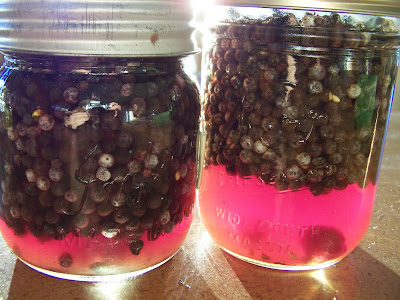 These are truly very simple to make and, though I never relish the thought of being under the weather, I can tell you that having these on hand makes the thought of it not quite so bad.
Posted by Heather at 7:59 AM

Labels: Make It Yourself, Wild Foods and Herbals

I must figure out whether my elderberry is edible or not. I remember checking it out via the internet and it said NOT. But what's not edible about a plant like that? Especially if it's still an elderberry?

Ah, sweet elder medicine!
We are really enjoying our elixir every day now. The boys like the sweet taste so it's no hastle to dose them easily.

I found your blog through Flow of Love, and I'm really enjoying reading back through. We share a lot of interests. I'm adding you to my Google Reader, and looking forward to reading more! :-)

Looks yummy. Thanks for the link. This is definitely something to keep on hand.

have to try it next year

That looks wonderful - we used to be able to find Elderberries in the mountains of NC but I've not seen any up here...

Shelia,do you have the Red Elderberry? My book says the berries of that can cause nausea when eaten raw and that the stems, roots and foliage are toxic. Do you have a photo of it?

Thanks so much for the inspiration Nettlejuice. I'm looking forward to tasting it.

Affectioknit, I was pleased to find the bushes in bloom when we moved here mid-June because it made it so easy for me to spot them. Maybe now that you're on the lookout for Elder you will find some next year when they are in bloom? :-)