Yesterday I used some of the fresh tomatoes to make a batch of catsup.  I chopped them up and put them in a large pot with a chopped onion and a large red pepper. 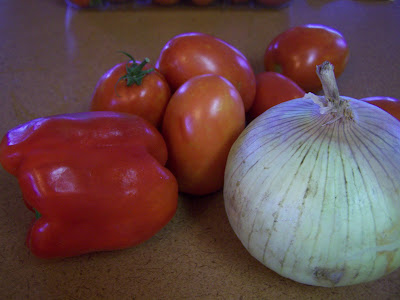 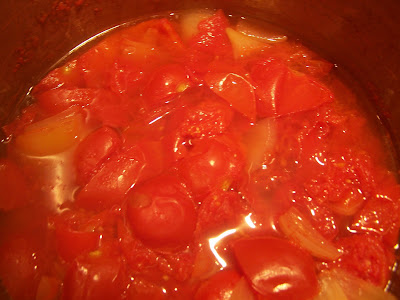 Once these were soft I ran it all through the tomato press. 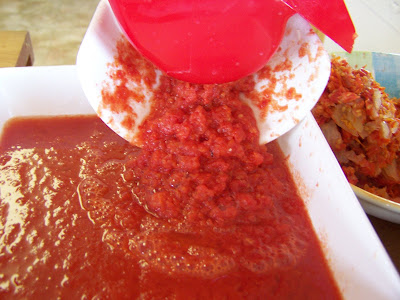 I had found two quite different recipes for catsup and they called for different spices.  I wanted to use what I had on hand so finding recipes with different spices in them allowed me the freedom to experiment a bit with something I had never made before.  I used dried mustard because I didn't have mustard seed.  Lovage seeds from my Lovage plant and some stems off my celery plant in place of celery seed, bay leaves just because, cinnamon instead of cinnamon stick and then garlic, cloves and peppercorns. 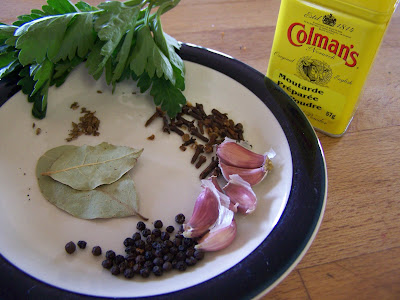 The pressed sauce went back in the pot with all the spices and simmered until thick and reduced. 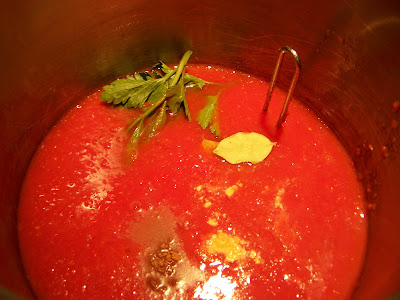 I ran it through the press twice more after a phone call from a friend where she mentioned that this would make it super smooth and shiny.  I added some sugar, salt and vinegar and cooked it down some more. 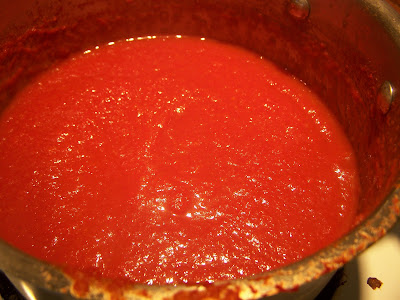 And then, since it had been brought to my attention and all of a sudden I wanted it super smooth, I zipped it up with my hand blender and got it even  smoother. 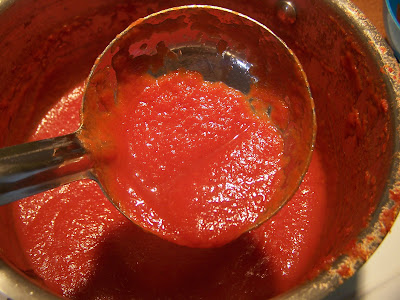 It turned out to be gorgeous.  Pure deliciousness...and I don't even like store-bought catsup. 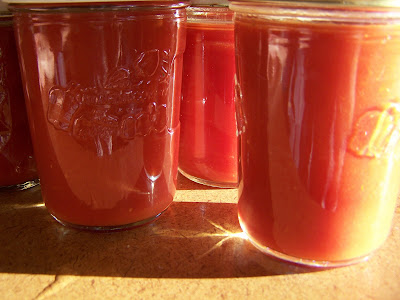 Even S, who is quite particular about catsup and insists on buying a particular brand name catsup, was delighted with it when he tasted it last night.
Posted by Heather at 7:31 AM

Yummy! It was L approved so I'll have to get the recipe (for next year)

wow, I am really impressed!

WOW! I hope you documented your recipe so you can make it again...

oooh! it looks even better than it sounded!! i'll make my recipe and then we can taste-test. blind, of course! yum yum

What a wonderful idea, I cant wait to try this!!!

I have my grandmothers catsup (in aussie we call it tomato sauce lol).

It makes a sauce to die for, over hot or cold meat and will keep in a dark cool room for at least a year.

The receipe is on my blog under tomato sauce:)

Samantha - yes, I'm pretty sure L was doing a bit of a catsup on a spoon jig. It certainly did seem as though he liked it. ;-)

Hi Andrea - I really think it is worth trying. If you have catsup lovers in your family you really can't go wrong having it, especially if you have lots of tomatoes in your garden this year.

Affectioknit - I did sort of scribble some notes right into my Ball Canning book so I could mostly remember what I did for next time. I should jot down a few more details while they are fresh in my mind because I do seriously tend to forget as I am a can't-help-myself-recipe-fiddler. ;-)

You're on Mary-Sue, a blind taste test it is. Let's make sure we have some fries on hand though because, like E, I'm not much into catsup off the spoon, really. ;-0

Thanks, Molly. I'll check your blog for the tomato sauce recipe. I'm hoping to get some more tomatoes and I'll always do think the "old family recipes" are the best ones. ;-)

This looks awesome! Did you just do a water canning process?

Hi Jess-Wendy, yes it was just processed with water bath nethod. I don't have a pressure canner - although each year I am tempted to get one.