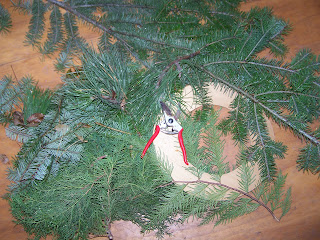 This morning (when the house smelled of yummy baking because I had a test batch of crackers - based on raincoast crackers - in the oven) I realized that we didn't have any sort of candle tradition going on right now. In previous years we've had an advent candle that we would burn down a notch each evening as we counted down the days until Christmas and some years we've lit a candle as we counted down until solstice when we could look forward to the shortest day of the year being behind us. I miss not having a nightly candle ritual in these dark-so-early-days and so I decided to quickly put together a greenery wreath to set on our coffee table with some candles. 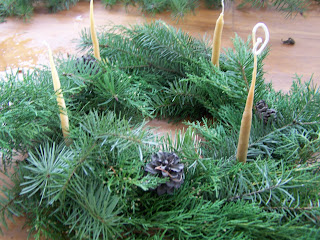 I grabbed some extra greenery, the staple gun (a required tool for any slapdasher) and a wooden base that I had on hand from years ago when I used to make pop can wreaths for gifts(shown here if you scroll down a smidge). I cut some greens and stapled them on then popped a few little pine cones on top and added the four candles. We don't follow any particular traditions preferring instead to make up our own as we go along. We've brought many new traditions into our own little family over the years and have added them to the ones that my husband and I enjoyed and kept from our own families while we were growing up. The really nice thing about making it up as you go along is that there are no rules...so you really can't go wrong. :-) 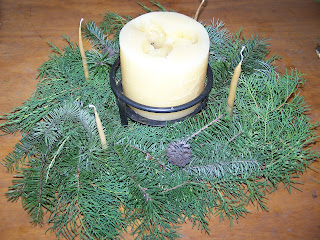 So...that is also my explanation for Why on earth is she making an advent type wreath when we are already more than a week into December???
The first candle on this wreath is for Hope (and will be lit post-haste). The second is for Peace and it will be lit on the weekend. The third stands for Joy and it will be lit on Solstice (and we will be very joyous that the days will start getting longer) ;-). The fourth candle stands for Love and I will certainly be counting my blessings - I know how lucky I am to be surrounded by such a loving family. I've also placed a big candle in the middle and we will light this one each night when we are at home - to me, it symbolizes the warmth of the sun and the beauty of the earth.
Posted by Heather at 12:50 PM

That is so beautiful Heather! You are one talented slap-dasher.
I had to admit I had a little giggle about the peace candle being lit this weekend - is that before or after the wrestling match ;-)