Ever since E was a toddler he would eat any fruit he could get his hands on. It didn't need to be ripe - not at all - he would happily grab at tiny apples, green berries and unripe peaches that had fallen on the ground. He has always had an especial love for strawberries. Here he is as a toddler just after a bath in his "clean" jammies helping himself to some unripe strawberries. He was unstoppable and so I stopped trying to convince him to wait 'til they were ripe. What was the motivation for him? He knew that he would get plenty of ripe ones too because we pick hundreds of pounds of them. He wanted ripe and unripe and he wanted them now!! 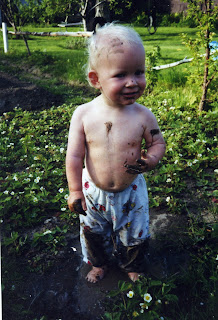 Now I was just the other day telling a friend that I really felt he was growing up. (he is eight now) The reason I thought this was because for the first time he has been able to wait patiently for fruit to ripen. ( a big deal for him) He has had his eye on his strawberries since they started to flower. He watched the tiny fruit develop and waited still. Two weeks ago he noticed that they had the slightest tinge of colour on one side but still he waited. Last week he noticed that they were coloured almost all over but wanted to wait for the deep red to develop. Only two days ago he decided that they were almost ready...yesterday things went very wrong, indeed.

As I was out preparing an asparagus bed I heard a roar of indignation.

"I am so mad," he said. "Something has been nibbling at my berries."

With a sinking heart I joined him crouching over his plants. Sure enough. Something had been nibbling at his ripest berry. 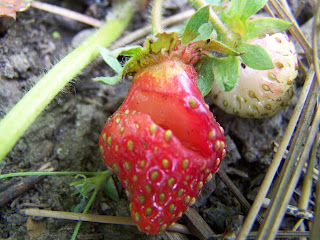 So, we talked about the possibility of it being a mama robin who needed energy to feed her babies and then he popped the remainder of the berry into his mouth. Will he continue to wait 'til they are ripe? I am not so sure that he will.

Somehow looking at that picture of E makes me feel weepy. Time passes SO quickly. They grow up before we blink twice...
Could he install a lovely old scarecrow in the backyard? Or put up some tinsel strips around his strawberries?
I can't get over how much he still looks like that tiny little babe in the photo... wow.

Darling photo of E!
Oh, no! I guess he really won't be keen to continue to wait.

That is a blossoming maturity. I remember how Robert never wanted to wait for things to ripen. I have noticed that it's the first berries that seem to get eaten. Maybe the birds move on to the fruit trees? It is a lovely picture, he really has matured physically and mentally.

I have ripe strawberries to pick today. Have you got woodlice. I know for sure they are the culprits with mine as I see them burrowed inside. I do like to just pick them off the plants and eat them while I am gardening, but I have to make sure there is no protein lurking inside them before I pop them into my mouth! I don't know if it helps but I leave a few ripe ones on the plants purpously to try and encourage them to stick to the same strawberry every time? x

Don't tell my kids but I ate the first strawberry to ripen in the garden. It's one of my habits - I think it's a superstitious thing, really - but it drives my kids nuts.

I'm with Mary-Sue on the feeling weepy bit, too. They DO grow up fast.