Many years ago, I read a quote that went something like this - a man is as rich as his wants are few. The way it was worded made a lot of sense to me. I guess it is similar to this one from Thoreau.

A man is rich in proportion to the number of things he can afford to let alone.
Henry David Thoreau

Anyway, it really stuck with me, at the time I was looking to get by on a way smaller income, but it also just seemed like a good lesson for life. Since then, I have found that indeed my wants are quite few. Generally material things don't excite me too much (well, besides my thrifting finds) and I find that there really aren't many things that I want to own, but in the past week, I have discovered that in fact I do have wants. I want me this kitchen. Imagine how many people you could have for dinner with that huge table.(it looks better in colour on the show) 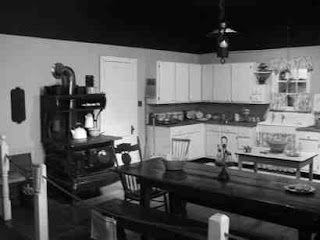 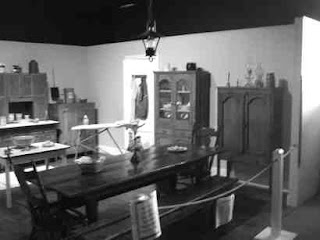 Isn't it simply fantastic? Recognise it? It is the kitchen of the Waltons. Remember them? My sons and I have been sooo enjoying watching the old shows on a DVD set we got from the library. We've had a lot of talks about times in the depression and what it may have been like. I do not try to romanticize that time to them, but I do think that there were many things that were abundant in that time that are seriously lacking in ours. The strong family connections. The dependence on and strong sense of community. A habit of enjoyment of simple pleasures. And knowledge. Knowledge to use it up, wear it out, make it do or do without. Knowledge to be able to do almost everything for yourself. It takes a lot knowledge to live that sort of life and to thrive doing it. 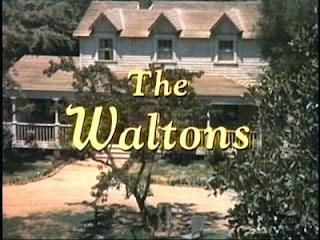 And while I am admitting my wants, I find that I also want the wooden clothes drying rack that they keep in their kitchen, it would come in handy here in the winter. (I will be on the lookout the next time I go thrifting.) Actually, I would kind of like the whole house, I mean, just look at that front porch. And just imagine the garden that I could have with all that space. Eeep, those are a lot of wants.
Posted by Heather at 3:43 PM

Hee! those are GOOOOOOD wants. Must be because I have them toooo! Very interesting post. Gets me to thinkin'...

I just bought The Waltons Season 6 at Superstore on Friday night. I only had Seasons 1-5 & am nearing the end of Season 5 -- I was starting to panic... (I recently noticed that the ORL has them as well -- too late for me). They have almost become my nightly before bed ritual.
I am torn between the Waltons house and the Little House on the Prairie House though. The idea of having a small house to clean is SO appealing to me! :)
But the warmth & closeness between family & friends is so wonderfully conveyed. Warmth, peace, comfort, taking time for others... hopefully we are able to realize these "dreams" in our own homes :)
Rebecca :)

I have never seen the Walton's! Grew up with no TV and your post followed by Rebecca's comment makes me want to see the series. What a fun thing to do whilst laid up on the couch! Thanks!

Mary-sue, they are so, so lovely to watch. I do recall watching it as a child, although I didn't remember the details about it. When we watched the first show the other week, the moment the theme song started, I felt like I had been transported back into my childhood. Music is so strong for me that way. I hope you will get the set from the library and watch. S said he wasn't going to watch them, but I notice he keeps coming and sitting with us now to watch. And offering tissue whenever I start to get teary-eyed. ;-)

Yes exactly, Rebecca. This is just what I love about the shows --> "But the warmth & closeness between family & friends is so wonderfully conveyed. Warmth, peace, comfort, taking time for others..."<--- You said it so well.

I also love the LHOtP house, but the front porch and the kitchen of this one really make me love it. To my way of thinking, those are such great places for family time.
Plus, from experience, a small house doesn't necessarily make for easy cleaning, it seems more that you are always trying to organize stuff to fit. :-) Something to be said, I guess, for having the small number of possessions that the Ingalls had.

Ten years ago, five of us moved from a 900 sq foot house (per floor) into a 1400 sq foot house (there are now six of us). My smaller house was "harder" to clean in that there was no unused space. Unfortunately, I have now managed to fill every nook & cranny of the bigger house.... and we now feel like it is too small for us again. Decluttering time....
I love our camper. It contains only what we ABSOLUTELY need, takes about five minutes to tidy & sweep daily, and leaves me with so much time for the family, AND MYSELF!! AND one toilet to clean... I have three at home -- I really do not want to clean THREE toilets -- two are used almost exclusively by males.... (not even going there...)
Anyways, a part of me wants to sell everything we own & live in our camper for awhile... but the rest of my family thinks I'm losing my mind :)
Rebecca :)

Hmmm, sounds like I am living in the size of house that you used to. I too sometimes would like to live in our trailer, and then after I have done that for a few weeks, I start to think a tent would be even better. I often think that my dream job would be as a park ranger. :-)
I hear you on the males' bathroom - my guys clean theirs themselves for the most part.